Now, not everyone’s heart’s desire would be a wheelbarrow, but this woman was a gardener. She worked long hours moving rock and soil and stone. She was tired of doing things the hard way. A wheelbarrow would make every project easier.

Sure, she could purchase one herself. But wheelbarrows come in a giant, unwieldy box. Assembly is required. She would need to arrange childcare (all three car seats would have to be removed!) so the thing would fit in the car. She would have to ask for help at the store (something at the time that she did not like to do) to get it from-the -shelf-to-the -cart-to-the-checkout-to-the-car.

She thought the idea of a fully assembled, big, beautiful contractor’s wheelbarrow sitting on the front porch would be a most marvelous gift. 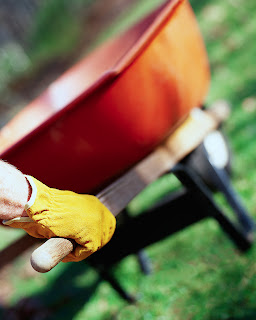 The woman, of course, did not list these reasons. Or come outright and ask for it. She simply suggested a wheelbarrow; and the man, thinking that it would not be much of a gift, made his own plan. He purchased a necklace. A truly beautiful piece, with a stone in the woman’s favorite color.

And the morning she unwrapped it, the woman cried tears of sadness. And the man did not understand. The gift was generous, and beautiful but the woman felt it was not what she needed, or what she wanted. She felt that he did not listen. He was hurt that she did not appreciate his gift.

This made the man and the woman realize that perhaps, in the rush of life and jobs and children and bills, they were not communicating; not relating to each other; not understanding each other.

They set to work. It took time, and it took effort. They made time to be alone together, to actually talk and exchange, ideas, feelings, desires and expectations. The woman stopped expecting the man to read her mind. The man came to understand that sometimes a gift is more than money, but time.

They lived happily ever after.

She has a very nice wheelbarrow.

One Reply to “The Gift”