Just back from a family trip to Greece and Italy. (Really! I am jealous of myself.)

A few comments and observations:

*British Airways is amazing. There was no comparison with any of the American airlines that I have ever flown, even overseas; it cost a little bit more, but everything was included and was worth every penny. 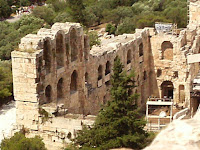 *The people of Athens were amazing. Everyone (everyone!) spoke beautiful, fluent English. And many spoke several other languages as well. As for a command of their language, I now get the origin of the saying “it’s all Greek to me.” Their words look to me like someone pressed the caps lock AND the alt key and then sat on the keyboard. Utterly undecipherable.

*There was a sadness and desperation in Athens that made me sad. Everywhere people were so kind, but also apologetic for the state of their country. Protests and strikes everywhere. Small bands of police officers clustered in the squares. A trip near the Parliament building where we passed officers bearing uzi’s on the street. It felt like a little taste of what might occur in this country should our economy continue its current path.

*People were very kind. We were traveling with four adults and four children, three of whom are pre-teen girls. With the giggling and squealing and chattering there is no WAY you can even pretend to pass yourself off as some sophisticated European traveler. You may as well carry the American flag on a stick. Complete strangers would strike up a conversation or offer guidance. We felt very safe and looked after considering the difficulties in Athens right now.

*Solar panels were EVERYWHERE. On so many buildings in Athens; great fields of them in Italy. I kept wondering, “um, why, why aren’t WE doing that?”

*The Italian countryside is just breathtaking. I love how the country-quilt landscape of olive groves, fields of sunflowers, hillsides of grapevines. So many homes seem to have a little patch beside them with maybe a couple fruit trees, some grapevines, a small garden patch. Never just giant field after giant field of the same crop. 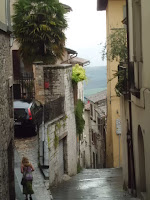 *The culture of walking; of taking a stroll. Of being out and about, visiting; I am sure this also springs from the fact that the homes are smaller, and there isn’t tons of personal space. But that sense of community really shines through. In the small town where we spent several days, I let my girls go to the piazza by themselves. They ran into five people that they knew. Very sweet.

*My children have returned as much more adventuresome eaters. Sure, they ordered French fries at every opportunity! But, hey, they tried a lot of different things, and truly got over any phobia about green things being sprinkled on their plates. We also developed some new passions (Greek cheese dip, potato pizza) and honed some others (my son had calamari daily, and we expanded our list of gelato favorites.

*Once again I was taught that you can plan your brains out, but at the end of the day, you gotta go with the flow. One of the most magical moments came after dinner one night when my friend spontaneously called her art restoration teacher to see if we could stop by his workshop. He kindly met us at his studio, and he had just completed restoration of a wooden sculpture of Jesus the Christ that was just in the beginning phases of restoratation two years ago when I had visited before. To stop by that evening and see the masterpiece (photo below!) completed; it was astonishing to behold. 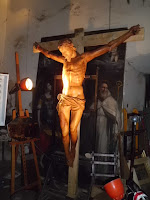 *Traveling; meeting people from other places, other countries, other experiences; I realize that people — US — humans; no matter where we live on this planet. We are spirit, crammed into a body. They are no different than me, just born in a different spot on the planet. I hope, I truly desire, that when I make choices, decisions that impact the planet; that I will remember it’s not just about impacting me and my children. My decisions, my choices; will affect them, and their children.