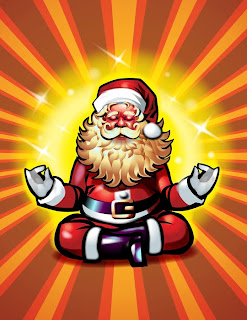 We’re driving in the car the other evening, and my six-year old son says, “Mommy, is Santa Claus real?”

It’s a question that causes every parent to gasp. He’s my youngest, and I want him to believe as long as possible in the magic and mystery that is Santa. It’s pretty amazing how many thoughts ricocheted around in my head before I simply said, “Well, honey, what do you think?”

There was a momentary pause, and he began to laugh. “Well, OF COURSE,” he giggled. “Who do you think brings all that stuff, the Easter Bunny?”

Now, that is funny.

I must say I’ve always felt a little uneasy with the whole Santa Claus-Easter Bunny-Tooth Fairy thing. When my children were really small, I remember thinking how important it was to tell them the truth, to be the one person they could count on to lay down the unflinching reality of life. I didn’t want to cause harm or create fear, or give them information they could not absorb. I only wanted to state the facts as I knew them and saw them, so that they could trust me on every level.

In yoga, the Sanskrit word for truth is “satya.” It is one of the yamas, which in the classic eight-limbed system is the very first step in the yoga journey. “Yama” means control or abstention. And the yamas are very much like the Ten Commandments, except there are five, and they are way more strict.

The yamas are to be followed on three different but interconnected levels: thought, word and deed. You must not only decide and accept what the truth is, you must also speak it and allow your actions to convey that truth. Finally, all three levels must be balanced with the most important yama, non-violence. As Goswami Kriyananda clarifies in his book The Spiritual Science of Kriya Yoga, “Many people find it difficult to distinguish between truth and untruth. Whatever the ultimate solution is for each individual, the guiding factor should be mindfulness so that there is: (1) No intention to harm. (2) A true understanding of truth in your own mind, speech and actions as it relates to the whole of life.”

This guideline requires that you have a “true understanding of truth.” I struggle with this. What is truth? “Truth is one, but paths are many,” said Swami Satchidananda. Sometimes it seems to me that the path is one, and the truths are many. Maybe the answer comes from investigating truth on a much bigger, cosmic scale.

Which leads me back to the bearded man in the bright red suit.

What to tell the children about Santa? My choice, wise or not, has been to dodge, parry and spin. I’ve been known to say “who, me, Santa? Are you kidding? Do you think I could travel the world and give out toys and still be here in the morning to make you breakfast?”

The most real things in this world – love, faith, God, energy – are invisible to most of us. Believe in the power of that which you cannot see but can feel and sense. That belief alone can be enough to make it so. 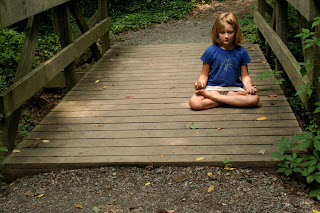 There are few things as emotionally satisfying as teaching yoga to children. They totally get it. Closer to the source than most grown-ups, they are better able to open their minds to possibility and potential.

Most of them, unlike most adults, still live in their bodies. Ask them to chant “Ram, Ram, Ram” and they can tell you where it vibrates. Take them on a journey in their mind to a secret garden, or flying over the ocean, and they’re there. It’s not a leap for them to sense the connectedness between themselves and the animals, the trees, the stars.

I’ve learned a lot over the past couple years about teaching children and about children living in our culture. When structuring a class, the number one thing is have a Plan A, B, C and D. Children tend to merge into each other’s energies pretty quickly, and depending on who is leading the pack that day, the game that worked great with the first class might be greeted with sneers by the next.

The second thing I learned is that it is a different world, more challenging world. Children are coming to school without being fed. Without getting a descent night’s sleep. Without a pencil to write with. Without the ability to sit still or to listen. If you know anyone who is a school teacher, especially a public school teacher, you should go out of your way to thank them for their service to your community.

Last year I was teaching a small group of children. One girl was holding her stomach, her face pinched. I asked what was wrong and she said her stomach hurt. So we did yoga for tummy aches; knees into the chest, twists – we call it the “tummy series” at my house. At the end of class I mentioned to the aide that I hoped it had helped. “Well,” the woman shook her head, “it’s probably because she’s hungry.” It felt like a slap just to hear it.

Our children are under a lot of stress. A lot. Sometimes, I’m not sure that children from well-to-do familes are any better off. I’ve seen children that cannot sit on the floor with straight legs. Really; the back of the body THAT tight. I asked one little boy, second grader: “Honey, when you lay down to go to sleep, can you go to sleep or do you just lay there while your mind jumps around?” His eyes grew wide. “How did you know that?” he asked. How did I know? The body – it doesn’t lie.

The third thing I’ve learned is that children yearn to be noticed and acknowledged as individuals. I guess we all do.

Have you seen these cars around with the little stickers on the back that indicate the family members who ride in the car? The little stick-figure dad, mom, girl, boy and cat, or any of the endless combinations that we would label a family unit? What is it the occupant is trying to tell us? Is it that they just want to be acknowledged; for us to know a little about their story? Or because, without those other people and things, they have no reference point; no identity?

So often in yoga with children, they tell me little snippets of their life. “My Grandma is picking me up today.” “Daddy doesn’t live at my house anymore.” “I have a boo boo on my knee.” They see me for ½ an hour, just a few times in a month; and yet run up for hugs, for acknowledgement of their existence; to ask if they can share their pain.

Last week I finished up teaching yoga to the first grade at the local elementary school. At the beginning of the class I announced that it would be our last class until January because I’d be teaching the fourth grade for a few weeks.

Instantly one little girl raised her hand, and I pointed to her to speak, expecting to hear a request for a pose.
“I love you,” she said.
“I love you, too,” I replied.