So, you might know I’ve been mountain biking at Carvins Cove.  And I lovelovelove it, and it has really helped me to arrange time for myself, to get out in nature, to get a sense of freedom — and get me used to doing things that kinda scare the crap out of me. 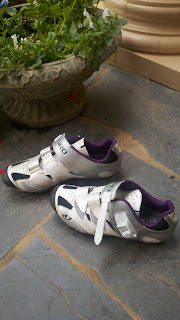 And ever since beginning, my rider-friends have been suggesting/ coaxing/plain-ole’-bugging me to get clips.  You know – these special shoes and special pedals so that you actually attach your shoe to your pedal?  It makes your pedaling more efficient and with mountain biking it also makes it safer because your feet aren’t bouncing off the pedals when you hit bumps and rocks and roots.
My first attempt was in my front yard on my 45thbirthday; and I was happy to admit to anyone that I was scared.  Falling down hurts.  But hey, trying to cultivate a little courage during this cycle, so let’s throw a little challenge in amongst the cake and accolades.
And let me tell you – epic fail.  I am on the asphalt driveway (yes, clearly the wrong choice); clip in just great; unclip one foot just great – except it is NOT the foot that I lean to.  So with right foot unclipped and ready, I lean to the left; smack.

Okay; let’s go again – in the grass this time thank-you-very-much.  Not so bad; but still, not so great.  So my plans to test drive the clips on the greenway that lovely Spring day disappear as my fear of running over some toddler or taking out a runner come seeping into my consciousness.

I practice numerous times in my front yard and on the road in front of my house.
Fast forward to this past weekend; away at a yoga retreat (which was just fabulous in case you were wondering) right near Douthat State Park.  My dear friend Steve built me a magical 29er bicycle and he had brought both our bikes along – new clip-in pedals on mine — and when the afternoon free time came up, we went on over.
Have you ever been to Douthat State Park?  Holy fabulousness!  So beautiful; and the mountain biking trails are unreal; it looked like the mountain laurel had been planted by a team of horticulturalists and the trails dusted with pine needles by  fairies.  Did I mention the mountain laurel was actually blooming?!  Just hundreds of bushes surrounding us; rocks and trees and streams and nobody but us and a couple day hikers.
So, it is on these brand new trails that I am trying my brand new pedals.  Let me tell you – I was afraid.  Intimidated.  Scared.

It wasn’t because my companion would be mad if I was slow, or upset if I needed to stop. He is one of the most patient people I have ever met.

Mixed in with a healthy fear of falling on something hard and breaking a body part.

What did I learn on this ride?  First, I learned that fear wears you out.  Just that little inkling of fear lurking around in my mind made me so tired and so unable to be myself.  It made me think of times I had lived in sustained fear –  fears from 25 years ago — fear of not being able to make the mortgage; fear that my first husband would hurt me.  Fears from 14 years ago — fear that my baby wouldn’t make it through her open-heart surgery; fear that I would be a horrible mother.

Big fears all rising back up because of this little fear.

Hmmmmm.
I also learned that you can’t go half way.  At the beginning I got the great idea – HEY!  I will just clip in on one side and leave the other unclipped!  I can have it both ways!
Nope; not so much. 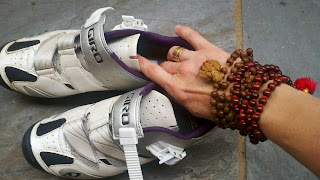 Cause only going in half way was actually worse than not clipping in.  I had one foot connected and the other one just sliding all over the place; absolute stability competing with absolute instability.
Either clip all the way in; or just don’t.  This half-way stuff doesn’t work.
Hmmmmm.
I also learned this; that falling down doesn’t hurt nearly as much as not trying.  You get your scrapes and you get your cuts – but isn’t that life and living?
The same dear friend who got me the bike and pedals also bought me a card once: it said, “Life Begins At the Edge of Your Comfort Zone.”
We had a beautiful ride.  And yes, I did fall down, and will continue to do so.  And that is OKAY with me.
Time to clip in, my friends.
Shanti,
Jill